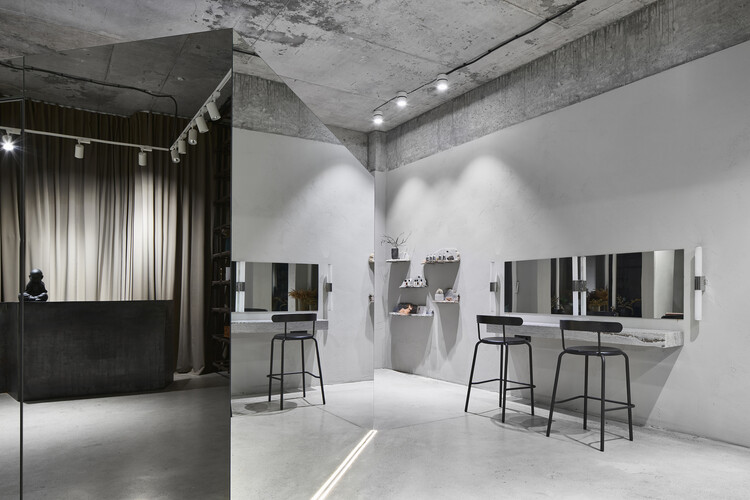 Text description provided by the architects. The 146 square meter space is located on the ground floor of a newly constructed downtown apartment house. There is also a yoga class and other hairdresser/barber studios nearby, which together form a one-of-a-kind beauty cluster. High ceilings and large windows all around were the main advantages of this place. The client, a young woman, only wanted to move the salon she had already been running for four months to a new location. The interior design was specially created with aesthetic cluster values ​​keeping in mind environmental friendliness and naturalness.

One of the main goals was to implement smart zoning. The space had to be planned in such a way that both the client and the staff felt comfortable in the same room. Another challenge was to bring natural light inside the compact areas and maintain the impression of integrity and clean space. The color palette is based on cool, “Baltic” colors that favor the view outside. There are elements of textile fabric and wood to accentuate shades of gray. The core of this concept is a mirror-formed cube which later became the authentic feature of this saloon. Every inch of space can be seen through mirrors; The entire size of the room can be seen from outside which attracts the people passing by. There is also LED lighting around the perimeter of the entire cube to turn the cube into an art-object.

The concrete ceiling was left as it is, the walls were finished with plaster, the floors were repainted and polished. The makeup artist’s console and workspace are made of beautifully grained marble. Perfume shelves are cut from Baltic boulders. A hot rolled metal desk was made specifically for this project on a special order. Dried flowers were used in decoration. Hogweed inflorescences can be mounted on the roof to show visitors a captivating dance of lights and shadows.